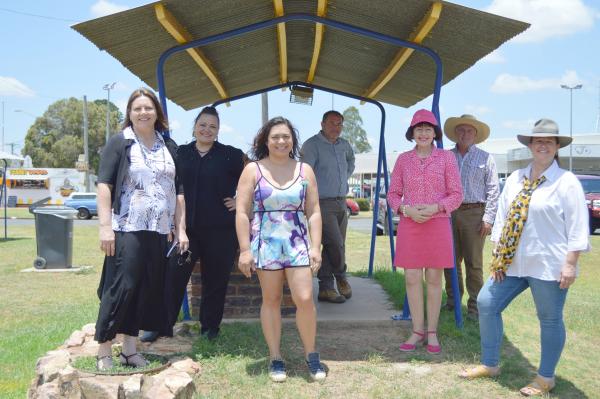 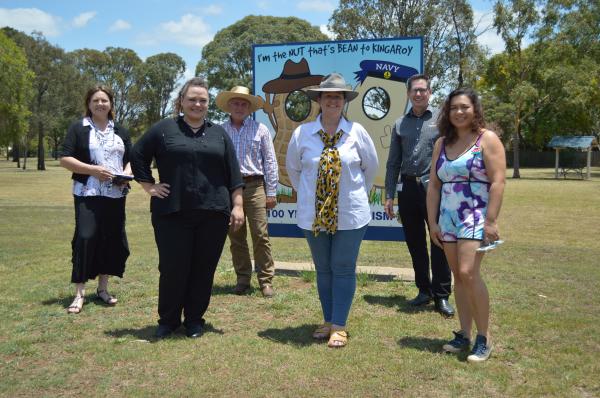 With 100 years of peanut crops rich in Kingaroy’s history it is a wonder there has not been a ’big thing’ yet created to celebrate it.

Abigail Andersson is excited Kingaroy’s next ’big thing’ is becoming a concrete reality with designs for a peanut sculpture now released.

“I just want one to happen as there hasn’t been one in these 100 years,“ she said.

Ms Andersson and fellow ’Kingaroy Needs A Big Peanut’ committee members, Kristy Board and Tina Torrens, met with a team from the South Burnett Regional Council to nut out the finer ’big peanut’ details last Thursday.

The group met in the proposed spot for the big peanut, Lion’s Park, so they could grasp the full nutty vision.

Across the road from the Peanut Van, the group narrowed down the Lion’s Park barbecue area as a potential prime spot for the sculpture.

Now was the time to launch the big peanut as 2020 marked 100 years since the first commercial peanut crop in the region.

Ms Board said the centenary motivated them to use the momentum to make their peanut dream a reality.

“It’s getting a lot of attention, it’s a big opportunity to talk about the region,“ she said.

Kingaroy has become known outside the region as the ’Peanut capital of Australia’ and Ms Andersson said many people over the years have visited the South Burnett town expecting to see a big peanut.

The peanut sculpture is designed by Kane Minogue and consists of several steel parts with old motorbike chains, peanut farm machinery and farm scraps from the region.

Barwork will represent the peanut exo-shell, with gears and cogs reflecting the history of peanut machinery in the South Burnett.

“It’s about the detail in the sculpture itself,” Ms Andersson said.

“There’s lots of little parts in our history that it will combine.”

The group is asking for donations of machinery parts for the sculpture.

They want the small details like embossed parts of machinery and items like bike chains from IT 490 bikes which were often used by the peanut farmers.

“We also want the stories attached to the farming communities,“ she said.

“We’re trying to make sure everyone can be part of it and be proud of our story.”

The current design will stand at 2.5 metres high on top of a six foot plinth.

“Unless we can get more money raised to make it bigger,” she said.

The sculpture will be illuminated from the inside and the plinth will also be lit up.

The group has already raised more than 30 per cent of their overall goal of just over $12,000.

The aim is to get 333 people to give $30 towards the peanut sculpture.

This will get their name down in history as a ‘NUT founder’ and an invitation to the ‘all you can eat nut buffet’.

Even though the sculpture is projected to be 2.5 metres high, it will still be recognised as a ‘big thing’ in Australia since it will be many times the size of an actual peanut.

Potentially peanut plants to be nurtured by local gardening groups may become part of the overall design.

With a sculpture design plan in place, the ’Kingaroy Needs A Big Peanut’ committee and the council are now developing a proposal for the ’Big Peanut’.

Councillor Danita Potter said the spot had the potential to be an ultimate tourist park down the track.

In the future mini ’Big Peanut’ souvenirs might be made to match the sculpture.

Ms Andersson said later down the track there could still be an opportunity to have more and bigger peanut sculptures around Kingaroy.

This project was something that was realistically achievable for the community right now.

“We’re not trying to make a silver bullet for tourism, we just want to start somewhere,” Ms Andersson said.

“You can never have too many peanuts, it’ll give people something to celebrate.”

A sausage sizzle will be held at Andersons Fruit Market on Saturday, 5 December from 7am to 11am as an opportunity for community members to donate to the project or bring along machinery items.

Donations can be made at Andersons Fruit Market or online at gf.me/u/y6ba5u