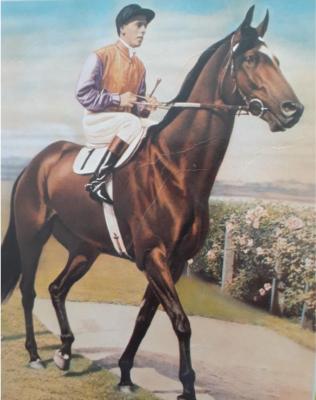 Undoubtedly the greatest weight carrying racehorse of all time amassing 15 successive victories in just one year was the Queensland galloper Bernborough.

The tragic circumstance was that in his 19th start in 1946, the constant weight plus three serious checks in the Caulfield Cup ultimately led to his breaking his front fetlock never to race again where the plan was to take the superstar to gallop against the best gallopers in the United States.

The legendary book on Bernborough, which was difficult to obtain, came into the hands of my daughter Maree Kratzmann who saw second hand books of both Bernborough and Don Bradman (the greatest cricket legend) in a second hand SVDP shop in Gladstone.

The Christmas present was a real delight as one had the opportunity to not only in 1946 as a 12 year-old boy to have my Dad take me to see the great Bernborough while in December of the same year, my older late brother Arthur surprised me by travelling to Brisbane from the Kingaroy rail station to attend the Australian-England test where Bradman was still batting past his century followed by the longest cricket six hit over the grandstand (a record that still stands) by Keith Miller.

Bernborough’s performances which were not in the days of television screens had racing followers tuned into radio broadcasts and if you visited the movies, Bernborough was often on movie theatre screens with the Cinesound News right throughout the nation.

The book “The Story Behind The Legend” was compiled and written by Bill Sigley in conjunction with regular jockey Athol George Mulley.

The total contents comprised 242 pages which was printed at the time by Boolorong Publications when the company was based at Bowen Hills (Brisbane).

There were no tote facilities in this era so all transactions were made with bookmakers on the respective tracks plus other operators with no licence were considered illegal.

“I was fortunate enough at 12 years-old with my late father to catch a tram in the Brisbane suburb of Toowong which travelled to the gates of the Doomben racetrack.

“The cheapest area was to cross the racecourse (known as The Flat) which with my late Dad, cost us only one shilling.

“Before the race was run, Bernborough paraded down the straight and many said he could not win because of having to lump 10st 3lb over just a sprint course.

“When the field reached the home turn, Bernborough was second last and then as he commenced his run, the outstanding commentator in the late Keith Noud said “He’s coming like a tornado” and duly had the race won at the 50 metre mark”.

The following week, trainer Harry Plant accepted with Bernborough from his sprint win to the Doomben Cup where over the 11 furlong course he carried 10st 10lb to victory.

The Mighty Bernborough and Athol George Mulley with his tremendous weight on the way to the start of the 1946 Doomben Ahern Memorial where his sensational winning finish from second last at the turn has never been beaten. Bernborough’s achievements in just some nine months along the eastern seaboard are honoured at Eagle Farm with a museum of his outstanding record.

Apart from his Doomben victories, Bernborough in earlier Victorian starts of 1946 achieved what was regarded as the impossible in taking out the six furlong (1200 metres) Newmarket where over the final 200 metre sprint he clocked a magic 10 seconds, a record which still stands to this day.

The champion is the only galloper to ever start in a Newmarket at 4/9 on while as it was the largest spring race of all time, the race attracted a crowd of 45,000.

NEXT ISSUE: The story that led to Bernborough contesting the Caulfield Cup and his following start which brought the nation of racing followers throughout Australia to a standstill.