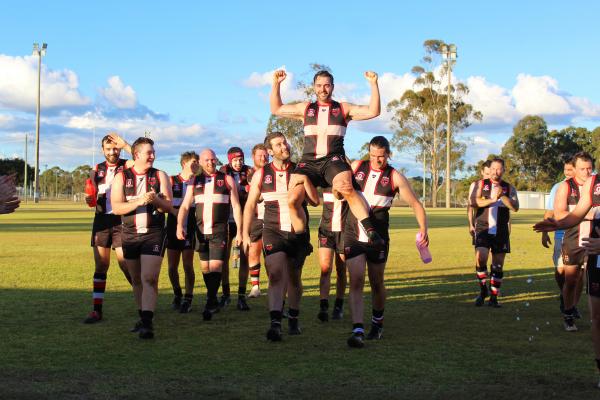 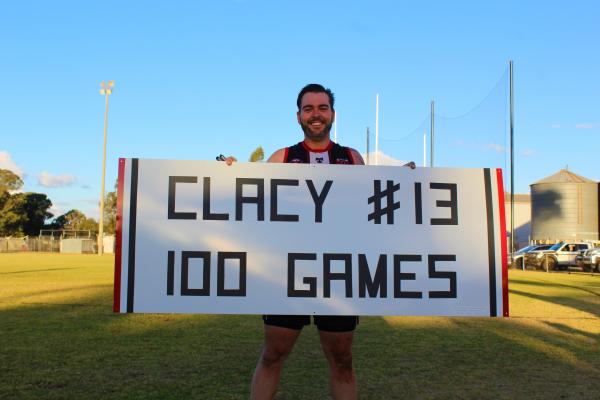 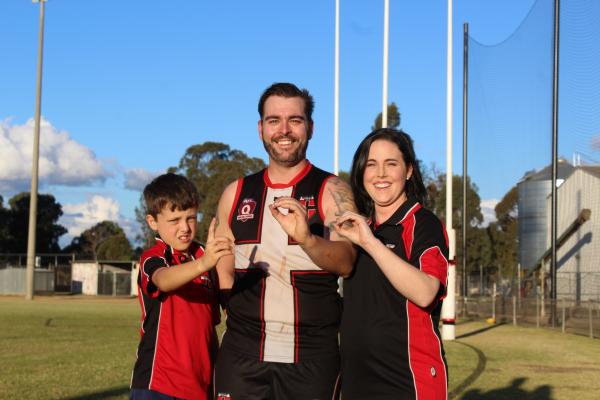 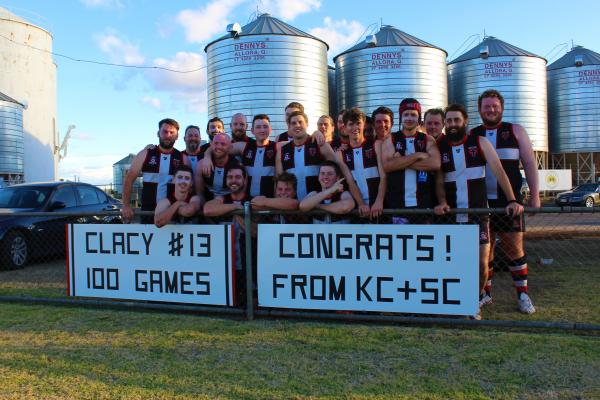 Daniel Clacy has secured his spot in the history books after lacing up for his 100th game for the South Burnett Saints men’s team.

His passion for the game began when he played for Nanango/Kingaroy Jets as a teen, then earned his way to become a Bulldog before the club folded in the mid 2000’s.

As one of the founding members, Clacy said this new era of footy in the region started from humble beginnings.

“Will Reid contacted me out of the blue one night in 2012,” Clacy said.

“He found me on the Bulldogs page and asked me if anyone wanted to play.

“We went up to the St Mary’s oval and kicked the footy around for three to six months.

“He had the grand plan of getting the team back together.“

The two men did all the groundwork before playing their first match the following year.

“We played our first game in 2013, so I always wear that jersey number,“ he said.

“Number 13 is unlucky for some but it’s been lucky for me.

“There’s been plenty of lows but also many highs since starting the club.

“The first few years were hard.

“We were getting absolutely pumped, sometimes by a 200 point deficit.

“I always feel comfortable around people who include everyone.

“Regardless of their skills, age, ethic background, inclusion is a very big part of our club,“ he said.

“I don’t care where you are from, if you do the right thing by us as a team, we will support you no matter what.

“The club is like one big family and it helped me get through a lot of hard times earlier on.”

Former Bulldogs player and match day coach Andrew Foley said it was only fitting Clacy was the first person to reach this achievement at the club.

“Clacy and Will Reid were the two people who got together and said we need to get football back in the South Burnett again.

“When they decided to get the team going, they changed one colour from blue to red and the name but it’s at the same ground and has the same culture.

“The culture has been created largely by Clacy’s vision.

“He has shown terrific emerging leadership and to reach 100 games and have a win in both grades was a real credit to him.

“You can feel the great atmosphere around the club, which is where life long friendships will be made and that’s what footy’s all about.“

Clacy’s wife, Bonny Clacy said she was extremely proud of him for his efforts on and off the field.

“It’s like a second full time job,” she said.

“He’s usually the first one here and the last to leave, along with Scott Ingram.

“There’s a lot of people who contribute behind the scenes, but without Daniel doing what he did, there would be no club.

“This is his passion and I am so happy for my son, Ollie, to grow up around this club.”

The couple will also celebrate another milestone this year as they are expecting a baby boy in September.

“Daniel’s already got the name picked out, I have no say in it,“ she said.

“Last year we planned our wedding around football so that we didn’t get married during the season.

“They moved they draw forward and our wedding fell on the very first game day.

“Now it’s looking like I may be due around about finals time,“ she laughed.

“You can’t plan these things sometimes.

Over the years, Clacy said there was an endless list of people and sponsors to thank for their support, including long-term sponsor the Carrollee Hotel.

Joining Clacy in achieving significant achievements in the first game of 2020 was the Trace brothers, Daniel and Nathan, who both played 50th games for the club.

When he strapped up his boots to run out onto the field, Clacy said it felt like any game day.

“A lot of people asked me how it felt,” he said.

“To be honest, it didn’t really feel any different.

“I felt great and everyone made me feel really special.

“Personally, every day can become mundane, you go to work and you go home,“ he said.

“You love your wife or your husband and kids, but being part of a sporting club gives you that extra outlet, whether you are a volunteer or playing, it gives you something to look forward to.

“My aim is to create a safe space for people to have fun and improve their skills.

“It’s something I truly cherish.”

02/07/2022
What an amazing term we have had - so many wonderful and exciting things have happened. We enjoyed a live performance of 'The 13-Storey...

SOCIALS: Great night out for runners