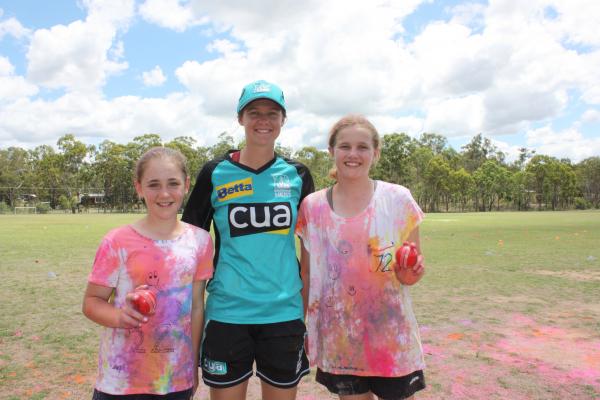 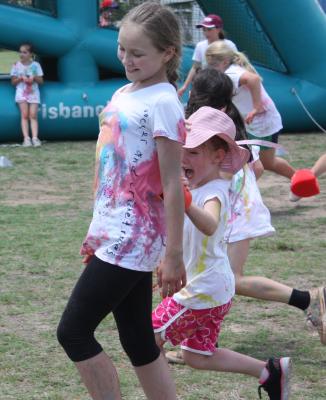 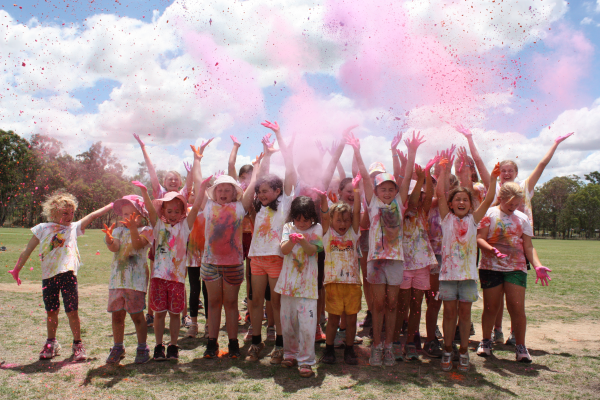 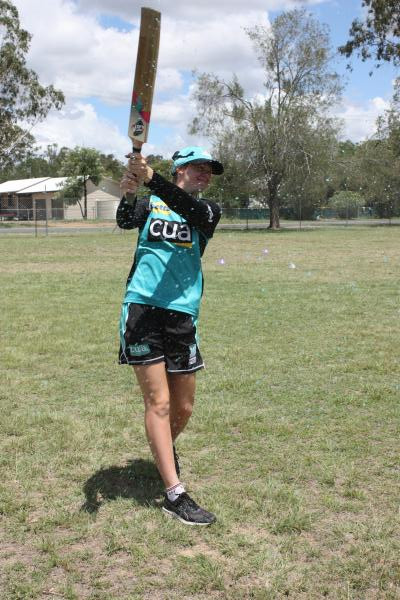 The Murgon-raised 19-year-old coloured approximately 25 girls’ experiences with fun, yet educational activities such as batting water balloons and dodging paint throwers on the final day of the ‘That’s My Game!’ girls cricket carnival.

Sippel said she was happy to see a big turnout of girls keen to try the sport as she was one of few young females who played in Burnett when she was growing up.

“It was good seeing how many girls came out in such a small area,” Sippell said.

“There are a lot of girls who are excited to play and want to take their skills to the next level.”

Having played cricket for three years, 12-year-old Nanango Scorpions bowler Emma Cullen said she already knew how to pace bowl, but she was excited to improve her skills and meet other cricketers.

“I was recently in a cricket team, so I want to make teams like that, and State,” Cullen said.

“Today I learnt to keep trying and see how far I can get.

“My favourite part of today was probably the colour run, and trying to catch water balloons.

“There was a really difficult one to catch because it was blown up all the way, and I caught it.”

Another experienced cricketer who attended the event was 13-year-old Toowoomba Girls Cricket Hub bowler Zoe Hoare, who said she hoped to play B Grade for South Burnett when she’s older.

“I would love to keep going with club cricket and make more representative teams,” Hoare said.

Meanwhile, Cullen said she was excited to meet Sippel, with her other sporting heroes being Mitchell Starc and Holly Ferling.

“It was pretty mind-blowing that we got to meet local female cricketers,” Cullen said.

“Before a game, I like to focus on what I can do.”

Likewise, Hoare said she also concentrated on her strengths to combat pre-game nerves.

“I remember I have all the protection I need and all I have to do is my best,” she said.

“When I watch cricket, I look at all the left-handed bowlers and see how they do it and how I can improve.”

‘That’s My Game!’ organiser Nic Roberts said the region has one of the highest percentages of girls playing cricket.

For other young females considering picking up a bat or ball, Sippel said playing casually with mates is a good way to start.

“I think if you have a group of friends you can have fun with it,” Sippel said.

“Even if you don’t have a group of friends, try and get involved in clubs because it takes the pressure off a bit.”

Not only does Queensland cricketer Sippel dream of playing cricket for Australia in the future, she also aims to become an early childhood educator.

Sippel said when she’s not busy training or competing in the Women’s Big Bash League (WBBL), she is focusing on her online TAFE studies.

“I’m doing study online at the moment, so I’m planning my schedule for the week and getting as much study done as I can,” Sippel explained.

“I hope in a few years’ time I’m playing for Australia, but of course that comes with a lot more training and hours.”

Although the Brisbane Heat won eight matches this season, Sippel said the team had endured physical and emotional setbacks.

“It was pretty rough in the hub, so it was good to see how our team got together and supported each other,” Sippel said.

“Some girls went without playing at all, so it was tough on them.

“To get in the right headspace I try not to think about the game too much before I play.

“I’m playing tomorrow, and I haven’t even thought about it – I don’t even know where my playing shirt is.

“I also listen to a lot of music, like country, and chill.”

These coping mechanisms were utilised when Sippel experienced a stress fracture and broken finger in past seasons.

“Last year I broke my finger, so I was out for the pre-season,” Sippel said.

“In a way it helped me become better in the field and helped set me up mentally when things don’t go my way.

“I had a stress fracture when I was 15 so for six weeks during school I wasn’t allowed to do anything in PE like jump or run.

“I kind of just went with the flow.”

When asked about her favourite cricketer, Sippel said she admired Adam Gilchrist’s honesty on and off the field.

“I haven’t met him, but I think I’d be pretty speechless if I had,” Sippel said.

“I’d like to ask him how he stays humble and what keeps him grounded.”

With part-time work, studies, and cricket commitments Sippel said it is rare she has the chance to visit her hometown, but she has been able to spend time in the region recently.

“In January we go on tour again for a few seeks,” Sippel said.

“It’s onwards and upwards from here.”