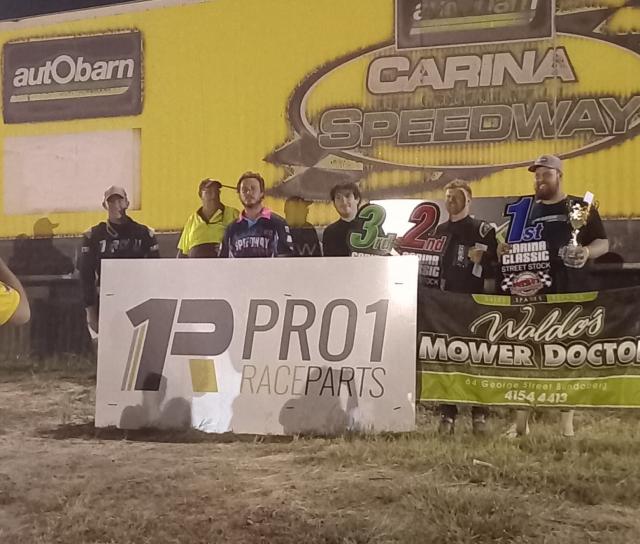 “I started out well, then I had a few car troubles,” Stead said.

He then had a shot at the A-Main Feature final race where he secured a podium finish.

Unlike other speedway events, the street stocks often flip a coin to determine that race’s direction.

However, Bundaberg’s Carina Classic is unique in choosing a ‘pole shuffle’ in the 30-lap A-Main Feature race where they stop the race 15 laps in and switch directions.

Racing in his street stock EL Falcon, set with an engine he built himself with his Cooters Mechanical team at work, Stead said he was “pretty lucky” to place where he did.

During the race he was sitting on the outside of Kahler when he tipped the Falcon in, ripped the rim off the tyre and slightly kissed the wall.

He headed to the pits where they threw the spare wheel on before jumping back in the race and taking the lead for the first 15 laps before the switch.

Stead thanked Sarah, Jaxson, Paul, Darren, Jack and Chris for their help in his victory at his second year at the Carina Classic.

The Carina track has two big straights with fairly big corners, which is quite different to Kingaroy’s Speedway track.

He was followed closely by runner-up Dylan Jarman and third place Darren Ciesiolka.

Stead was proud to see Jarman as a fellow podium finisher as he was also a Kingaroy driver and had been a passenger of Stead’s over the years as he settled into the Speedway world.

Speedway is definitely a family passion for Stead, who has been racing since he was 13.

“My Grandad bought me my first car when I was 13 and shared it with me,” Stead said.

“The first season in the car we actually won the junior club championship in Kingaroy …and that gave me a feeling of how good it felt to do ok.

“Ever since I’ve pushed myself harder and harder every year.”

He credits the sport to boosting his confidence in his teenage years.

“[Speedway racing] is a fair bit of adrenaline, you can’t really compare it to anything else,” Stead said.

Stead now races alongside his brother, but has also shared the sport with his grandfather and uncle who have since ‘retired’ from the motorsport.

“My Pop used to sell Hondas… and it was his dream to build a fast Honda for Speedway and I’ve sort of continued that on from him,” Stead said.

Stead is now gearing up for the Production Sedan Stampede at Kingaroy Speedway on Anzac weekend on 23-24 April.