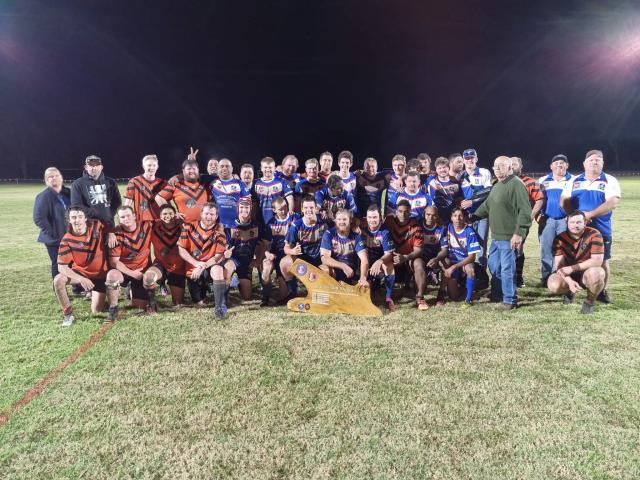 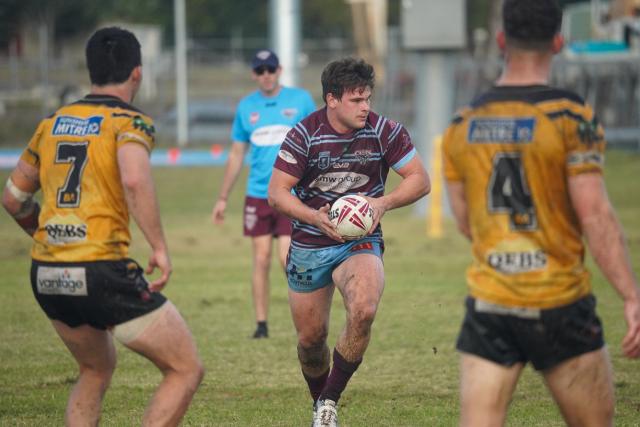 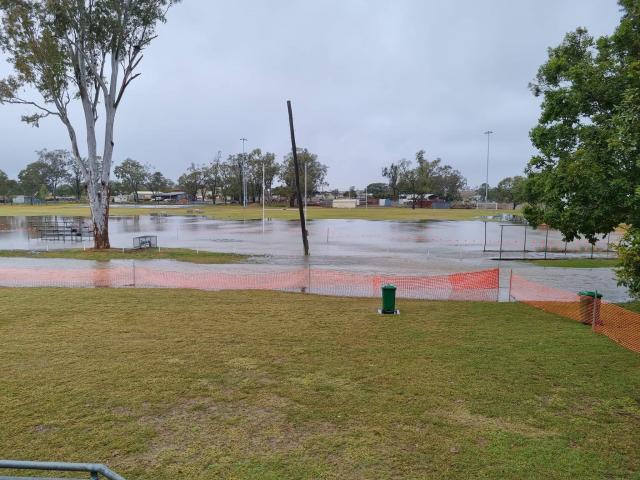 The coveted MacDonald Shield has returned to the hands of the Monto Roos for the first time in over half a decade, following the club’s dominant win over a weakened Mundubbera Tigers squad over the weekend.

The Roos and Tigers clashed at Monto’s Combined Sports Ground on Saturday, 23 July, in one of the last remaining games of the Central Burnett Rugby League season.

The battle for the MacDonald Shield is carried out between the two clubs every year to honour the work and dedication of father-and-son team Alan and Murray MacDonald, who managed the two teams for a number of years.

Mundubbera had managed to snag the Shield for the past five years in a row, most recently in 2021, where they shut out Monto with a resounding 34-0 game – but this year, it was the Roos’ time to shine.

The blue-clad Monto Roos started the game off strong, scoring two tries early on off the back of fullback Jarod Dahtler and centre Riley Thomsen, before Mundubbera hit back with a converted try of their own thanks to five-eighth Bailey Kimber and Tye McGeough.

Monto countered Mundubbera’s efforts with yet another two tries to end out the first half of the game, scoring via Izac Pointon and Stanley Bligh to end the half off with a score of 20 – 6.

The two teams continued to trade tries in the second half, with both squads repeatedly scoring two times before succumbing to their opponents’ offensive efforts; however, even a try by Mundubbera’s Bailey Kimber in the final two minutes of the match were not enough to allow the visitors to even out the score, and the game’s final score stood at 42 – 30.

A spokesperson for the Mundubbera Tigers said after the game that the club took its loss in stride following understaffing issues in the past few rounds of the competition.

“Another huge effort by the Tigers,” they said.

“Thank you to the boys who showed up today! It’s always tough with no bench but you guys did us proud once again.

“Also, a massive thank you to all of our supporters who travelled up to cheer the boys on.”

Mundubbera will enjoy a bye in this weekend’s round of the Central Burnett Rugby League competition, followed by the semi-finals on Saturday 6 August.

THE DAY THAT ALMOST WASN’T

Before Mundubbera and Monto took to the field to battle for the MacDonald Shield on 23 July, members of the Roos Rugby League Club arrived at their home grounds that morning to find the field inundated with water.

A large amount of rainfall the previous night saw the Burnett, Boyne and Auburn Rivers overflow, flooding many of the region’s roads, bridges and fields – including the Monto Combined Sports Grounds.

With Monto set to host one of the games in Round 16 of Queensland Rugby League’s Hostplus Cup Country Week that day, the club’s members knew they had to act fast to save the day.

The club rallied its fans and supporters to help with the clean-up efforts, with the organisation managing to source heavy machinery and plenty of boots on the ground to sweep up the water that had soaked into the oval.

The club battled all morning to remove close to 70 millimetres of rainwater from the field, but ultimately prevailed: the Combined Sports Grounds were deemed serviceable to play on and the day was saved.

Monto’s big Country Week host event saw the Sunshine Coast Falcons face off against the Central Queensland Capras, in a close game that saw both teams trade the lead.

In the end, the Capras beat the Falcons 16 – 10 by wrenching control of the game back in the final 20 minutes of the second half.

A spokesperson for the Monto Roos thanked everyone for helping to bring the grounds back to a playable condition, praising the ‘Monto Spirit’ and congratulating the town on yet another successful event.

“What an amazing and exhausting week it has been for the Monto RLFC,” they said.

“We would like to sincerely thank the QRL, Capras, Falcons and Mundubbera for outstanding games of football.

“But it is the Monto community that we need to thank from the bottom of our hearts – the way everyone rallied, after approx 70mm of rain and so much uncertainty, to show the QRL what Monto is really about.

“Whatever happens, we deal with it and move on – and look what we can accomplish. No, we didn’t get the crowd we expected or everything the way we envisioned, but that didn’t stop us.

“Monto, you are amazing. Thank you for making sure everything was done to ensure the games went ahead,” they added.

“The biggest thank you for everyone that showed up and supported this amazing event.”