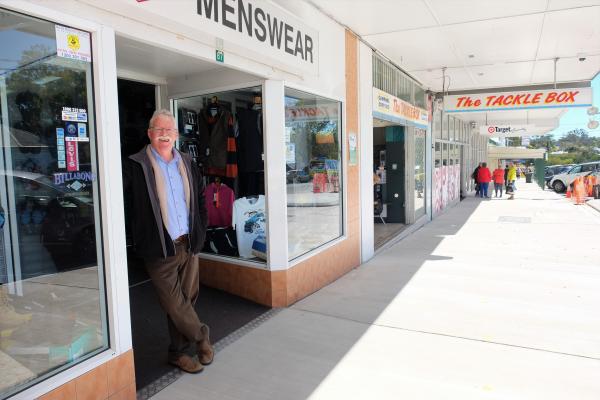 Murgon’s long-awaited footpath is starting to take shape, now that all major concreting works for the project have been completed.

South Burnett Mayor Brett Otto said the spray pave works were done on the northern side of Lamb St.

They are expected to be started along the southern side towards the end of this week.

“Lastly council will construct new parking bays designed to assist both elderly and patrons with children when entering the pharmacy,” he said.

Business owners are thrilled to now have the wider, smoother and safer path along Lamb St for Murgon customers and residents to use.

“Council acknowledges the outstanding cooperation of the Murgon business community and the delivery of the project has been a great partnership between the council and the community,” Cr Otto said.

Mark Smith from Mark Smith Men’s Wear, was thankful the footpath was finally coming together.

“We’re extremely grateful to the South Burnett Regional Council that after 12 years of nagging them, it finally came through.”

Mr Smith was pleased with the process of the footpath works.

“We’re also very thankful for the project engineer and how all of the project contractors have carried out their work,” he said.

“It’s a huge job and the inconvenience has been minimal.”

He put on a walk the plank competition while work was being done on the footpath outside his business to encourage customers to continue shopping.

“It was quite novel, that week was great,” he said.

“It needed to be done, and it’s a good outcome for everybody,” she said.

“The inconvenience for the shops was well worth it for the time that it was.”

Struddy’s Sports employee Jenni-Leigh Braithwaite said there had been no interruptions for customers while the path was worked on.

“It definitely makes it look wider than it was.”

Cr Otto said the spray paving works, which was an artwork design that was voted by the community, is projected to be completed by the week of August 17.

This design is expected to be a tourism feature for the town.

“The project will have key features that represent the Aboriginal heritage of our region and the historical memories of Murgon and the surrounding communities,” Cr Otto said.