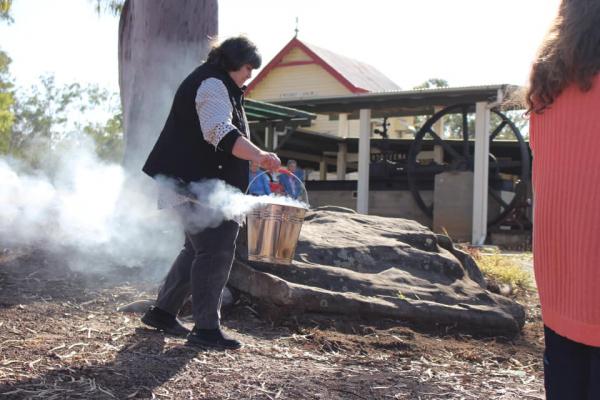 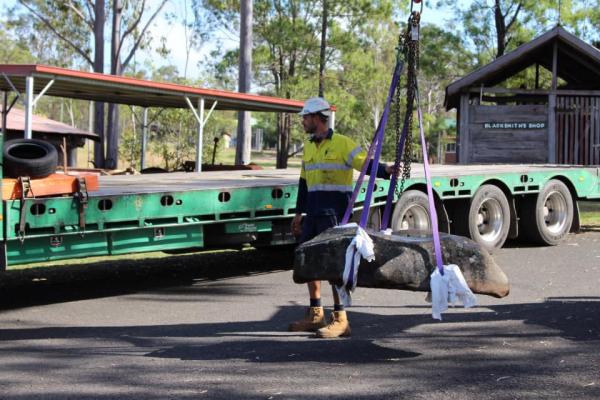 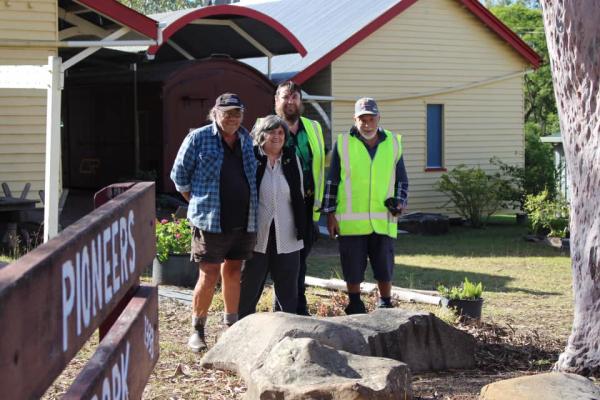 A collection of Indigenous birthing rocks at the Brooweena Historical Village has been handed over to its traditional owners after nearly 50 years of being on display, in a grand ceremony conducted by Dau’wai Kabi people that will see the historical artefacts reunited once again.

On Tuesday, 25 May they lead a smoking ceremony as workers from the Queensland Museum lifted the ancient fragments of rock onto a truck bound for interim storage in Bundaberg.

The birthing rocks at Brooweena consisted of five large sections of stone, marked with indents, hand and footprints and pocks and were used by the women of the local tribe, the Gurang, to assist in and distract from the painful process of giving birth.

“As the women were giving birth they would retrace, inscript and pick at these marks and tell stories to take their minds off the pain and to entertain their children that would be with them as they were in labour,” Kerry Smith, the secretary of the Woocoo Historical Society, which manages the Village, explained.

“The birthing seats would be positioned with their backs against the flow of water to help ease the pain in their back and carry away birthing fluid.”

These important artefacts of the Gurang were almost lost during the construction of a dam in the area in the 1970s, with the original place of the birthing rocks scheduled to be flooded.

However, an engineer working on the dam agreed to help out the tribe by arranging for the rocks to be relocated.

“The engineer was so moved by hearing the Gurang’s concern about losing this ancient history so valued by their people that he asked that they come and trace the massive stretch of rocks for the stories,” Ms Smith said.

“He then arranged for the rock face to be split as carefully as possible so to lose as little as possible. He put out invites to museums and schools to care for sections of the rock face until a time came when they could be joined once more together.”

Several of these sections found their way to Brooweena’s Historical Village, where they had been on display for close to 50 years; the largest section of rock at Brooweena was reported to weigh 3.3 tonnes.

The Historical Village’s records estimate that up to 90 sections of the original birthing rocks exist after they were split up and divided between museums and other sites.

Following collection from Brooweena, the engraved rocks were returned by the Queensland Museum into the custody of the Port Curtis Coral Coast Trust Limited, representing the Bailai, Gooreng Gooreng, Gurang and Taribelang people.

Queensland Museum’s role in this process is to facilitate the return to country of these engraved rocks.

All decisions about where they are stored and what happens with them are made by the Native Title Holders.

“The rocks will go into storage until the Gurang people can decide what is best, traditionally and for their ancestors, for the rockface once formed,” Ms Smith said.

“Sixteen sections are missing and it would be so sad if this amazing ancient ancestral history would be not be completed.”