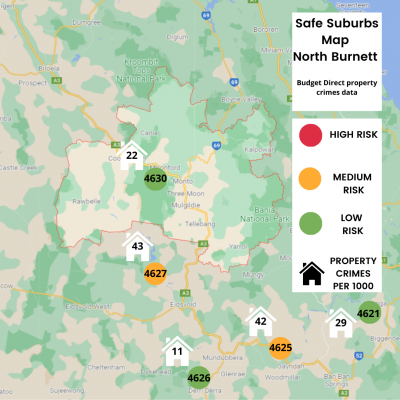 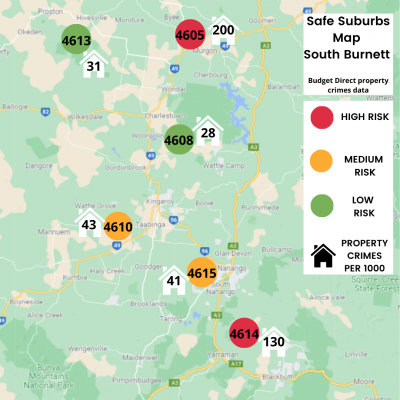 Budget Direct’s latest Safe Suburbs Map has revealed which Burnett suburbs rate the highest when it comes to property crime.

The 2021 interactive map allows users to enter their postcode and see how their suburb compares.

Overall the Burnett region rated mainly on the medium scale when it came to property crime, compared to the Queensland average.

Budget Direct’s Jonathan Kerr said home buyers have more access to property and suburb data than ever before.

“Whether you’re looking for your first home or an investment property, it is really useful to be able to look at the property crime rate of your desired suburb,” Mr Kerr said.

Budget Direct’s latest Home Burglary survey found that at least 1 in 4 Aussies (24.7%) were more concerned about home invasions in their suburbs compared to the previous 12 months.

“While you might be fortunate enough to live in a lower-risk suburb, it is still very important that you take actions to minimise your risk of home theft as this can happen to anyone.”

The Darling Downs and Maranoa regions proved to be Queensland’s safest regions for property crime, in comparison to the Queensland average of 130 crimes per 1000 properties.

Below is how the Burnett region fared.