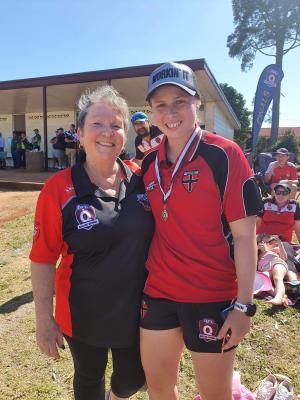 The South Burnett Saints Aussie Rules club celebrated in style at its presentation night after completing one of its most successful seasons as a club.

Held at their headquarters at Lyle Vidler Oval, both the men’s and women’s teams made it to the semi-finals before being defeated.

However, for the first time, two Saints players were crowned as Best and Fairest for the Darling Downs competition.

First year player Bree Pogany was awarded as the Heather Green Medalist and, for the second time, Nathan Trace was the worthy recipient of the Holman medal.

Pogany said she was shocked to take out the prestigious accolade after switching codes from soccer to Aussie Rules this year.

“It was certainly something I did not expect, definitely, since it’s my first season and I’m still learning,” she said.

“It’s such an honour to bring it home for the Saints.

“There’s a lot of great players in the league, so it was least expected.

“The ladies worked hard all season at training and games.

“We had very high numbers each week at training and games, which helped us have a great season.

“We had 11 new players, including myself, and to have been contesting for wins each week was amazing, and I look forward to the new season.”

Trace, who also reached his 50th game milestone for the club in 2020, said it was a cracking season lacing the boots up for the club.

“I’m proud to win another Holman – it’s always good to have those things when you’re older,” he said.

“As a team we had a really great group this year. We had returning players and new blokes.

“We all got along really well and have a welcoming culture, we work hard to get the best out of each individual and I think this year reflected that.

“I love playing for the Saints.

“As an original Saint, I’ve seen a lot of personnel change over the years but we’ve always had a group of committed players and that shows in how many kilometres our players travel for both games and training.

“We really represent the whole South Burnett, not just Kingaroy.“

Tristan Evert was awarded Best and Fairest for the South Burnett Saints men’s team, with Trace coming in second.

Kiara Wright and Laura Blackmore were joint winners of the women’s Best and Fairest, with Pogany taking out second place.