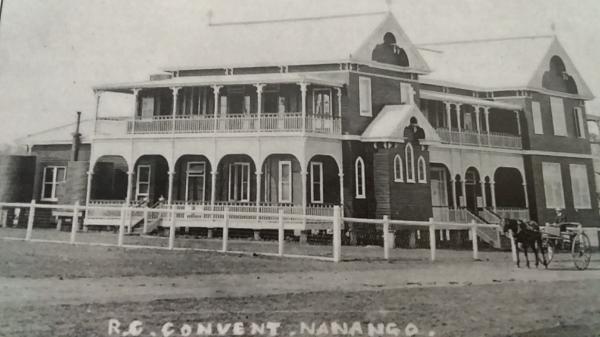 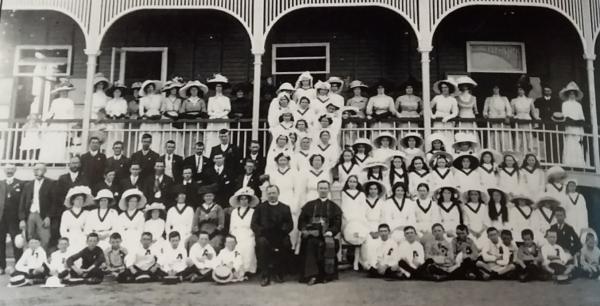 St Patrick’s Convent at Nanango is steeped in many memories of the old schooldays.

The 1912 building which was St Patrick’s Convent was a splendid two-storied piece of colonial architecture, described as having an imposing appearance built entirely of wood, with two gables, one at either side of an entrance hall, plus a handsome front and bold window treatment. The verandah had arched sweeps and beech friezes and the balconies had ornate brackets on the posts.

All ceilings on the ground floor were 13 feet high, and on the first floor 11ft 6ins, and every attention had been done to make everything as convenient as possible.

This included gas fittings in each room so that the entire building could be lit with the Colt’s Acetylene Gas Plant.

From the balcony fine views of the town and surrounding country could be seen. The Rev. Mother Patrick furnished the Convent throughout with “neat and appropriate furniture and fittings”. While it existed, it was the finest building of its kind in Queensland.

Father James Bergin was a great church builder and organiser who, during his term in the Nanango district, built five churches as well as the convent, which was finished on 27 April, 1912.

500 people attended the blessing of the foundation block by Father Bergin who placed a pickle bottle holding newspapers from April 1912 and several silver coins under the block before he laid it. The Convent was then dedicated to St Patrick.

Archbishop Duhig performed an official solemn opening blessing for the convent and on Monday, 29 April 1912. On the first day of school 64 children were present.

The Sisters of Mercy, who worked under Florence Nightingale in the Crimea, were dedicated to the education of the children in Nanango and in helping the parishioners. They willingly accepted any pupils of other denominations who wished to attend the Catholic school and these were given a purely secular education if desired.

One of these students who did all his primary schooling at St Patrick’s was retired doctor Brad Butwell, who related “as a non-catholic in a convent school.”

“Never once was I made to feel different, though instead of going to mass, we Proddies had to hose and clean out the dunnies -as toilets were called in my day.

“The most unforgettable nun of that era was Sister Mary Ferdinand, a.k.a. ‘Ferdi the Birdy’.

“I am sure most in my age group will have had a taste of her strap or a poke in the back with a drill stick, not to mention the swish around the legs with a pepperina switch.

“Despite all of this she was a nice old lady, and stern discipline did us no harm and most likely a lot of good!”

Another couple of anecdotes read: “Love won’t always have its way! Down through the ages in co-educational schools, love notes have been written and passed to the admired one.

Around 1917, one amorous upper schoolboy declared his love for an upper schoolgirl, on paper. Suspecting the contents of the note, the teacher swooped to confirm her suspicions. Before she could lay hands on the declaration of love, the amorous author popped it into his mouth, chewed briefly and swallowed.”

“The only time chewing gum in school was allowed was on one isolated occasion in Sister M Liam’s time… Each child was given a piece of gum to chew, on the understanding that when the flavour had vanished the residue would be given back for the purpose of mending leaking tanks.”

The Sisters of Mercy taught at St Patrick’s Convent until 1983 when they were farewelled and the convent was sold. Subsequently the lovely old convent building was demolished, with the timber being used to build houses.