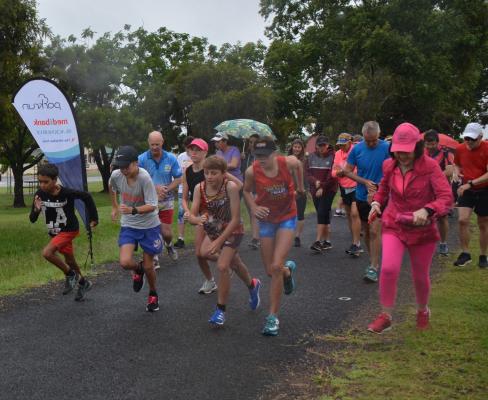 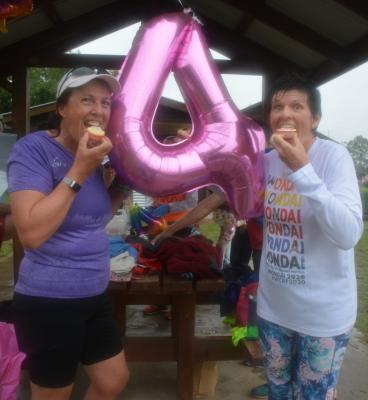 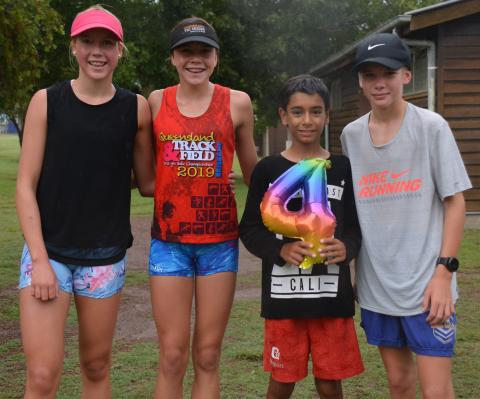 Wondai Parkrun did not allow mud and puddles to rain on its fourth birthday 5 kilometre parade on Saturday.

Runners, walkers and volunteers gathered at Gordon McKell Park at 7am to complete the course and savour a patty cake as they marked four years since the parkrun began.

Wondai Parkrun director Winston Burrows said the group was happy it could celebrate its milestone despite the wet weather.

“My feet and socks are wet and I’m cold, but I’m very proud that we have succeeded in getting through four years of parkrun,” Winston said.

“When we first started we didn’t really know what we were doing and we weren’t sure whether it would take off or not, but it has developed into a great event for people of any age and fitness level to socialise and compete against themselves.”

“For some people it is the first time they can catch up all week, so it’s nice for them even if they just walk half way and chat while they’re doing it.”

Although Wondai Parkrun has only existed for a few years, it has already produced a world-record-holding runner.

10-year-old Joshua Williams said he completed his first run alongside his mum at Wondai Parkrun before going on to break the 7-year-old 10 kilometre record with a time of 39 minutes and 27 seconds.

“I did my first run with mum and she was worried that it would be too far for me,” Joshua said.

“I like running because I’m good at it and I want to break more records.”

Another significant achievement belongs to Robyn Rye who has finished over 200 parkruns, with her first being in Warwick.

“One thing that is unique about Wondai Parkrun is the track,” Robyn said.

“I like that the run requires you to go in one direction, and then back towards the start line because it means faster runners see you and encourage you to keep going.”

The event does not only rely on runners, but it also relies on time-sacrificing volunteers.

One volunteer who enjoys the camaraderie between attendees is Naomi Andersen who said the crowd is family-friendly and eager to help each other out.

“Even if you’re not into running, as volunteers sometimes we verse each other to see who can upload the results the fastest.”

For people wanting to lend a hand or work up a sweat, Wondai Parkrun is held at 7am every Saturday at Gordon McKell Park.