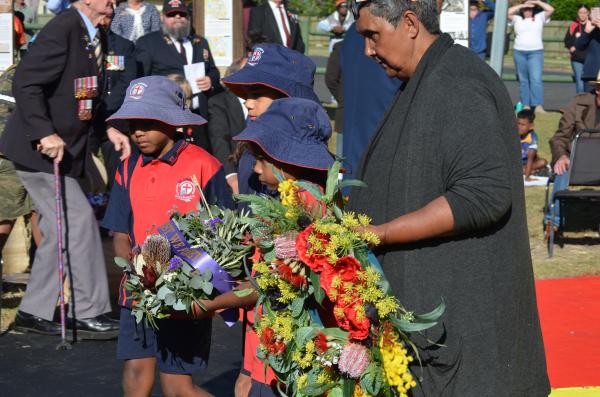 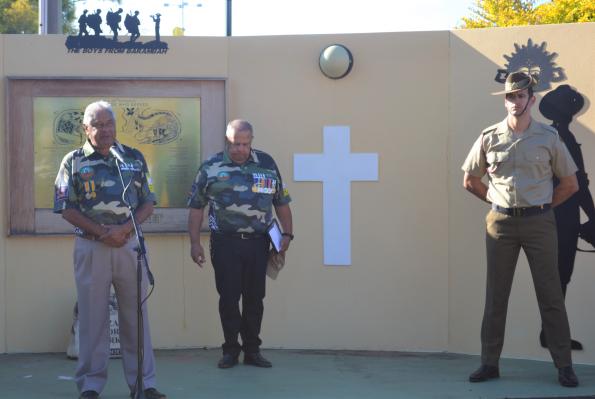 Hundreds of Cherbourg locals gathered around the freshly painted Aboriginal flag at the boys from Barambah Anzac Park on Sunday, 25 April, to commemorate the Indigenous soldiers who fought for their country.

Joseph Flick, recipient of the Churchill fellowship, and nephew of Cherbourg elder, Eric Law, gave a moving speech about his mission to bring Aboriginal spirits home.

“I told myself this morning that I wasn’t going to cry, I don’t know how many times I tell myself that.

“We as Australians left so many of our young fellas out on the battlefield,” he said.

Mr Flick spoke about the injustices faced by Aboriginal soldiers when trying to enlist and once they returned back to home soil.

“If you were dark you weren’t allowed to enlist, from 1916 a lot of those laws became relaxed after the casualties on the Western front.

“(My relative), Mick Flick, who fought in World War 1, would have hopped off the boat at Circular Quay and gone to have a beer to celebrate that he was alive and back on home soil.

“He would have gone to the pub and his mates would have been allowed in but he wouldn’t have been (because of his dark skin colour),” he said.

More than 1200 Aboriginal men enlisted in World War 1, around 800 served overseas and there are 100 known graves of fallen Aboriginal soldiers.

When Mr Flick received the prestigious Churchill fellowship, he decided to dedicate himself to a project called ‘bringing their spirits home’.

The research process to identify Aboriginal Australian soldiers is rigorous, as they weren’t required to specify their background on the enlistment forms.

Mr Flick was able to decipher the skin colour on the enlistment forms and gauge where they were from in Australia, through this process he was able to identify Aboriginal soldiers.

When he found Aboriginal veterans, he draped the Aboriginal flag on their grave and played the clapsticks for the deceased.

“I tell them that their family loves them and misses them,” he said.

His motivation for the project comes from knowing the strong cultural and spiritual ties Aboriginal Australians have to the land.

By reconnecting their spirits with home country, Mr Flick feels like he is honouring the often forgotten Aboriginal soldiers who served in the war.

Through his research, Mr Flick has travelled to France several times, and on each visit, he is moved by the tributes the French have given Australian soldiers.

Instead of getting angry about the injustices faced by Aboriginal soldiers, Mr Flick channels his passion into education.

“I talk to school kids in France and Australia about the massacres and how Aboriginal soldiers were treated,” he said.

The Cherbourg service also included a tribute song to the boys from Barambah and a presentation of a quilt to Vietnam veteran, Eric Law.

Seven things to do with mum this weekend

Testament to a good season

Pouring a path to the future