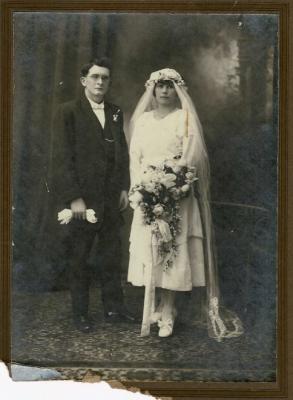 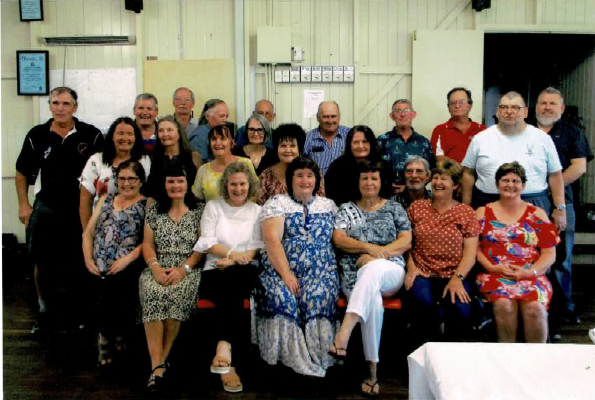 To celebrate the one hundredth wedding anniversary Bob and Juila McConville, their descendants held a family reunion.

They settled on a selection on Tim Shea Creek at the foothills of the Bunya Mountains where, in true pioneering fashion, they established a dairy farm.

Their dwelling was a slab four-roomed house with pine interior walls.

The property was isolated, with the nearest neighbour several miles away.

They had no telephone or wireless, and the only means of transport was by horseback or horse and sulky.

Supplies were ordered in bulk from Nanango and brought by the cream carrier to a roadside point some distance from their home.

Julia baked all the bread for the family, and vegetables were grown on the farm.

The dairy herd provided milk and butter, and they kept hens for eggs.

Fruit trees were planted and, before long, produced fruit.

The children received most of their education by correspondence from the Primary Correspondence School in Brisbane, although some of the younger ones rode six miles to the Glencliffe School until it closed in about 1948.

Grandson Chris Cavanagh welcomed the crowd and grace was said.

The Kumbia CWA provided dainty sandwiches and sweets. A feature on the table was a beautiful cake, with a print of the couple’s wedding photo incorporated into the icing, decorated with a small spray of fresh pink roses.

The original rose was brought from Poland by Julia’s grandmother, Caroline Ciesiolka in 1883.

Many family members have a bush of this rose growing in their garden, as it strikes easily from cuttings.

The cake was cut by Gabrielle, Bernard and Kevin, their three children present.

Apologies were received from Robert Jnr and John.

Of great interest were family photos, an extensive family tree prepared by granddaughter Anne as well as her scrapbook heritage album.

Granddaughter Julia wore a gold cross and chain that Bob gave to his bride Julia on their wedding.

Gabrielle wore the one given to Julia’s sister, Esther, as a bridesmaid gift.

Among the direct descendants were three sets of twins. Granddaughters Jennifer and Elizabeth (nee Andrewartha) celebrated their birthday that day and were surprised with a cake organised by their cousin, Helen.

The other twins present were great-grandchildren Megan and Rachel (nee Cross) and Nicholas and Kate Howard.

The day was voted a great success and hopes to be repeated before too many years pass.

After leaving the hall, many of the travellers camped at the nearby farm of Lorraine and Daryl Campbell. Lorraine is the daughter of Bob and Julia’s eldest child.

As many of the cousins seldom meet, they had a great time catching up and sharing memories of their beloved grandparents.