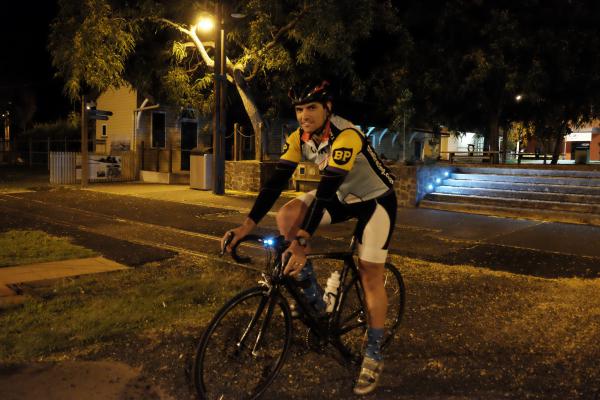 A cyclist embarked on an ambitious attempt to make the fastest trip from Kingaroy to Brisbane recently.

He was attempting to make his mark on the Kingaroy to Brisbane G.P.O record set by Les Cecil in 1939.

“I was perfect through to Nanango and just shy of 70km/h down the Blackbutt Range,” he said.

Unfortunately, he had to pull the pin just north of Harlin before 2pm after a significant drop in temperature overnight.

His goal was to reach the Brisbane GPO before 7am on the Sunday, but says he will be back to complete his attempt. He was to meet Cecil’s relatives at the finish line after his ride.

“I’m still determined to finish the job at a later date – it’s been nearly 82 years so another few weeks or months is ok.”

The 32-year-old cyclist from Kin Kin is a seasoned record-breaker with several records under his belt.

He was the first person to ride from Kilkivan to Kingaroy return on the South Burnett rail trail on 10 June, 2018, taking only nine hours, 20 minutes and 177 kilometres to reach his goal.

The Kingaroy to Brisbane G.P.O. is one of the more special records he has attempted.

Davis is currently writing a book on Les Cecil and his achievements, including the Kingaroy to Brisbane GPO record in 1939.

The stretch is one of the only runs that is not post-office to post-office, with the record holder Cecil famous for racing the mail train and beating it by more than two hours.

The Road Record Association of Australia describes, in a Facebook post, Cecil’s famous Kingaroy-Brisbane record set on 23 February, 1939 as “epic“.

“The word ‘epic’ gets used a lot nowadays, but riding over 240 kilometres into a headwind on dirt roads, through two severe storms, hitting 48 miles per hour down the Blackbutt range, crossing more than half a dozen flooded creeks, and beating the mail train by over two hours, now that is epic!

“It was such an extraordinary achievement that more than 80 years later, Les’ record of 8hrs 45min still stands, along with a dozen others he set in the golden age of road records.”

Cecil still holds the professional cycling record from Kingaroy to Brisbane via Blackbutt and Caboolture, covering a distance of 150 miles.

The veteran, 40-years-old at the time, had left Kingaroy at 7.10am just as the mail train left for Brisbane via Gympie.

Cecil reached the Central Railway Station at 3.55pm, covering the 160 miles in 8 hours and 45 minutes, he then continued to the Brisbane G.P.O to complete the inner-city record.

The train steamed into the station at 6pm, two hours and five minutes later.

One of Cecil’s bikes which he used for a record ride from Cairns to Canberra when he was 51-year-old now hangs in the Toogoolawah History Museum, where the old Toogoolawah station is (the bike was given as a thank-you gift to him after he helped someone suffering from a heart attack at the Ekka one year).

Davis had planned to ride through Toogoolawah as “a bit of a tribute“ to Cecil during his record attempt.