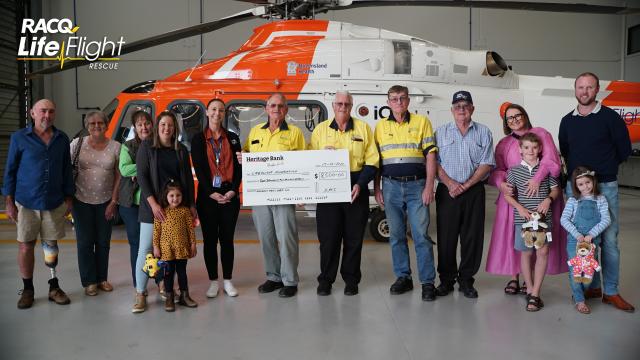 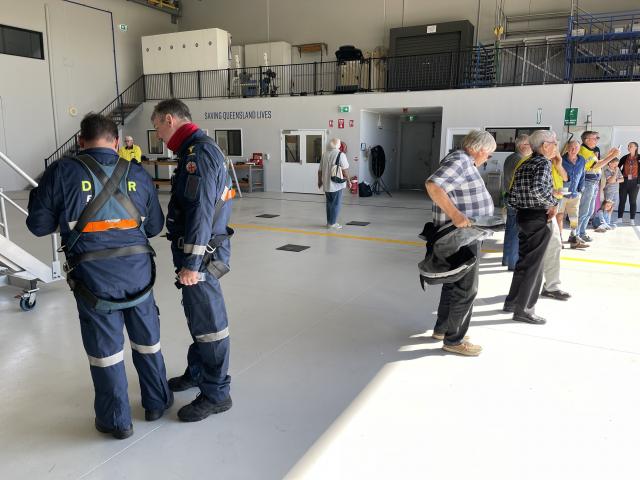 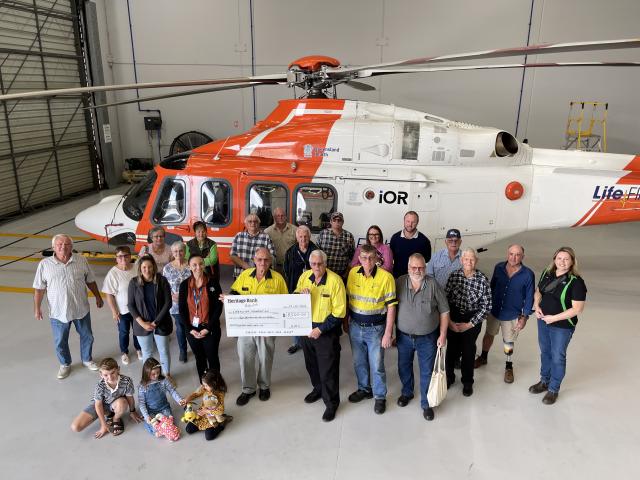 LifeFlight for its unwavering commitment to the Burnett region, presenting the organisation with a large sum of money donated during a recent fundraiser.

The band of 19 Burnett residents, which included four former LifeFlight patients as well as representatives of Kingaroy’s Men’s Shed, travelled to the Sunshine Coast on Friday 17 June to present the service with a cheque for $8,500.

Kingaroy Men’s Shed president Eric Ford, who was part of the delegation to the Sunshine Coast, said the trip served as a great opportunity to give back to the helpful service.

“Today’s self-funded trip [was] comprised [of a] number of Men’s Shed members and their wives, along with families who have used the LifeFlight service,“ Mr Ford said after the trip on Friday.

“Last year, a representative from LifeFlight traveled to Kingaroy to collect the cheque, and this year we thought we would do the reverse,” he added.

The Kingaroy Men’s Shed raised the money as a result of its ‘Dinner Under the Stars’ event in April this year, with the project being a massive success for the local group.

“[LifeFlight is] meaningful for our area, because it’s about a three hour road trip to get help at a major hospital, and that’s why it’s important that we have these helicopters operating,” Mr Ford said.

The visitors from the Burnett got the chance to explore the LifeFlight hangar and its various helicopters, some of which had previously ferried them to the safety of a hospital in the past.

Emma Brown, the mother of Louis, a former patient of the vital service, said the look ‘behind the curtain’ was a great educational experience for young and old alike.

“It was good to meet the people behind the scenes and to put it into context for the kids – it’s all part of that journey,” she said.

“This is our first opportunity to go back and to also show Louis the aircraft and to meet the people who help kids like him and families like ours,“ Ms Brown added.

“It was a fantastic day out,” he said.

“It was great to see where LifeFlight operates from – seeing as I don’t remember my flight in the helicopter, it was nice to see it up close and personal. It was lovely meeting a lot of nice people today,” Mr Muller added.

A spokesperson for LifeFlight thanked everyone who attended for their faith in the life-saving aeromedical service.

“It was very heartwarming to see the families who had utilised our services, all of whom had appeared in the Men’s Shed video, here today catching up with staff asking questions and seeing our facility and our helicopters,” they stated.

LifeFlight Community Engagement and Activity Co-ordinator Alisha Clarkson said the service relies on support from the community, including groups such as the Kingaroy Men’s Shed.

“We are very grateful for the South Burnett community giving back to us through this event,” Ms Clarkson said.

“Our helicopters make a difference to so many people in that region, connecting them to higher levels of care at major hospitals.”

“This was a wonderful opportunity for the past patients to get up close to the type of helicopters which airlifted them and it was clearly a very special moment for them.”